A man, his sled, and miles of snow 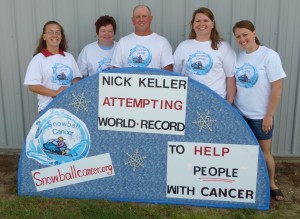 Nick Keller has been an avid snowmobiler for 39 years. He had been a distance snowmobiler averaging 200 plus miles a day and over 5,000 miles a season. He is known throughout the areas as “the mileage man”. Nick is an active member in the local snowmobile club and with the local/state snowmobile associations. He has also been involved in various other community organizations volunteering his time and talents.

Nick Keller marked the 20th anniversary of his mother Mary Jane Keller’s death in March 2009. Mary Jane died of breast cancer at the young age of 56 when Nick was only 34 years old. The Snowball Cancer Challenge was one way that Nick would be honoring his mother and celebrating his own life as he himself turned 56 in April of 2010.

While snowmobiling in Wisconsin Nick met a woman named Jane Sheline during the winter of 2007.  Jane was a deputy sheriff with the Dane County Sheriff’s Office in Wisconsin and diagnosed with terminal liver cancer. Jane did not have long to live.  During that visit they got to know each other and Jane asked Nick (and the fellow snowmobilers) to help her fulfill a wish of hers before she died. Jane wanted to learn to drive a snowmobile and go on a snowmobile ride. In February 2008, Nick helped fulfill her wish. Jane enjoyed her adventure and wished for a second trip the following winter. Sadly, Jane became too ill to go on the second trip and died in March 2009.

Thru the foundation, started with members of Nick’s family, he wanted to attempt to break the world record for most miles snowmobiled in 60 consecutive days as a fundraiser. He wanted to raise awareness, resources, and money to help people with cancer and their families.  As he himself has many friends and family that have cancer, are survivors of cancer, or who have died of cancer.

The Keller Family Community Foundation has planned events to raise awareness and money for cancer (Snowball Cancer Challenge). This event has allowed snowmobilers to ride with Nick during his attempt to break the record. The website also offers people the opportunity to donate money via a secure website or by mailing checks directly to the foundation.

Thank you for taking time to learn more about the KELLER FAMILY COMMUNITY FOUNDATION. We look forward to your support in raising awareness, resources, and funds to help people with cancer.

[…] on the miles. He is a great person and has done a lot of great things for people along the way. About Us | Keller Family Community Foundation __________________ We stopped to eat and noticed other riders coming in with snow jammed in […]